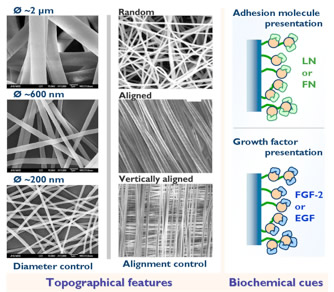 Nanofiber topographical and biochemical cues to be studied in this proposal. SEM images show a series of nanofibers prepared with different diameters.

We have developed methods to electrospin a wide range of biocompatible polymeric fibers (biodegradable and non-biodegradable) with controlled diameters (~150 nm to 2 µm) and alignments (aligned and randomly oriented).  In order to present the relevant biochemical cues from fiber surfaces, we have developed a surface grafting method to introduce various functional groups in a concentration range of 0.1 to 200 nmol/cm2 without compromising fiber integrity.

We are in the process of developing a versatile and robust scheme for surface conjugation of biochemical cues pertinent to stem cell adhesion, proliferation and differentiation, for example, key adhesion molecules (laminin and/or fibronectin) and growth factor (fibroblast growth factor-2, FGF-2).  We are interested to investigate how surface presentation of signaling molecules influences the signaling activation and stem cell proliferation and differentiation.