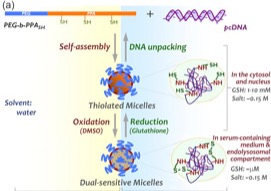 (a). Preparation of dual-sensitive micellar nanoparticles. Micelles are prepared in distilled water to yield compact nanoparticles, and then oxided to crosslink the core. The disulfide-crosslinked micelles are stable in blood, extracellular melieu and the endolysosomal compartment where the glutathione (GSH) concentration is in the micromolar range. These crosslinks can be reduced when they reach the cytosol and nucleus where GSH concentration is in the range of 1-10 mM; the reduced micelles become unstable due to the salt-sensitive nature of the PEG12K-b-PPA128K carrier, thus releasing unpacked DNA. (b) and (c). TEM images of dual-sensitive micelles prepared with 18.8% thiolated copolymer in deionized water (b) and after incubation with 0.15 M NaCl for 30 min (c).

In the context of in vivo delivery, it is important to enhance the colloidal and complex stability of the nanoparticles. On the other hand, making nanoparticles too stable will likely impede the DNA unpacking after they reach cytosol and nucleus.  Hence a balanced colloidal and complex stability should be tailored by considering specific tissue and administration factors. We have synthesized a series of PEG-b-PPA carriers and observed increasing DNA binding affinity as the molecular weight of PPA block increased from 3 kDa to 80 kDa.  Interestingly however, micelles formed with PEG12K-b-PPA128K (the molecular weight of PPA block is 128 KDa) exhibited instability in solution with physiological salt concentration and released most of encapsulated plasmid DNA 4 h after transfection in HEK293 cells.[2] Taking advantage of this quick DNA unpacking ability of these micelles, we incorporated a microenvironment sensitive, reversible disulfide crosslinks in micelle core so that these micelles remain stable in circulation where glutathione (GSH) concentration is low, but the release/unpacking of DNA can be triggered by high level of GSH in cytosol and cell nucleus.  We have shown that these dual-sensitive nanoparticles exhibited significantly enhanced complex and colloidal stability, yielded more sustained DNA unpacking in cytosols, and mediated enhanced and more prolonged transgene expression for at least 10 days.